Please tell us which country and city you'd like to see the weather in.

The Tbilisi Metro (Georgian: თბილისის მეტროპოლიტენი) is a rapid transit metro system in Tbilisi, Georgia. Opened on 11 December 1966, it was the fourth Metro system in the former Soviet Union. Like most ex-Soviet Metros, most of the stations are very deep and vividly decorated.

As of 2012, the system consists of two lines, serving 22 stations, operating on 27.1 kilometres (16.8 mi) of route and 62.5 kilometres (38.8 mi) of track. Of the 22 stations, 20 stations are below ground and two are surface level. Of the subterranean stations, 16 are deep level and 4 shallow. The former comprise 6 pylon stations, 5 column and 5 single vaults (built to the Leningrad Technology). The shallow stations consist of three pillar-trispans and one single vault (Kharkov Technology). Due to Tbilisi's uneven landscape, the Metro, particularly the Gldani-Varketili line, travels above ground in two locations. 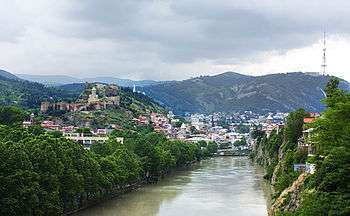 Tbilisi (Georgian: თბილისი [tʰˈbiliˌsi]), commonly known by its former name Tiflis, and often mispronounced as Tiblisi, is the capital and the largest city of Georgia, lying on the banks of the Kura River with a population of roughly 1.5 million inhabitants. Founded in the 5th century by the monarch of Georgia's ancient precursor Kingdom of Iberia, Tbilisi has since served, with intermissions, as the capital of various Georgian kingdoms and republics. Under the Russian rule, from 1801 to 1917 Tiflis was the seat of the Imperial Viceroy governing both sides of the entire Caucasus.

Located on the southeastern edge of Europe, Tbilisi's proximity to lucrative east-west trade routes often made the city a point of contention between various rival empires throughout history and the city's location to this day ensures its position as an important transit route for global energy and trade projects. Tbilisi's varied history is reflected in its architecture, which is a mix of medieval, classical, and Soviet structures.

The Spring Rhythms. Tbilisi-80 (Russian: Весенние ритмы. Тбилиси-80, Vesennye ritmy. Tbilisi-80) was a musical event held in Tbilisi, capital of the Georgian SSR, Soviet Union, from March 8 to March 16, 1980. It was the first official rock festival in the Soviet Union and is frequently considered the turning point in the history of Soviet and Russian rock music.

The festival was organized by the Georgian National Philharmonic Hall, the Union of Composers of the Georgian SSR, and the Republican Center for Youth Culture at the Georgian Komsomol Central Committee. The acclaimed Russian musicologist and the first Soviet rock-critic Artemy Troitsky was also heavily involved in organizing the event. The organizers enjoyed the support of Eduard Shevardnadze, the contemporary First Secretary of Georgian Communist Party, who is said to have sought, in this way, to pacify the Georgian youth increasingly involved in nationalist and dissident activities after the April 1978 demonstrations in Tbilisi, and to nurture his image as a liberal leader.